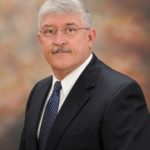 Dr. Michael Langston was born in Birmingham, Alabama on 11 November 1954. He attended the University of Louisiana in Lafayette, Louisiana on an athletic scholarship in Football and graduated with a Bachelor of Science Degree in Education in 1977. He was subsequently commissioned a 2nd Lt. in the United States Marine Corps. He completed The Basic School (TBS) in June 78 as a 0302, Infantry Officer and completed the USMC Infantry Officers Course in July 1978. His first assignment was with 3d Battalion, 9th Marines, 3d Marine Division as a Platoon Commander in India Company. His next assignment was to HQBN, The Basic School, Quantico, VA. as an instructor teaching Land Navigation, Patrolling, Physical Fitness, and Techniques of Military Instruction.

In December of 1983, then Capt. Langston resigned his regular active duty commission and accepted a reserve commission serving Marine Corps Reserve units in Raleigh, NC and Greenville, SC. Dr. Langston is a 1986 graduate of Southeastern Baptist Theological Seminary with a Master of Divinity Degree (M.Div.) in Theology and Pastoral Care. Upon completion of a year residency in Clinical Pastoral Education at Baptist Hospital in Columbia, SC, Dr. Langston pastored Cherryfield Baptist Church and was the Sheriff’s Chaplain for Transylvania County Sheriff’s Dept. in Brevard, NC.

He has an earned Doctorate (D. Min.) from Bethel Theological Seminary (1996), Saint Paul, MN with a concentration in Military Chaplaincy and Pastoral Care. In 2003 he graduated from the Naval War College, Newport, RI, earning a Master of Arts (M.A.) degree in National Security and Strategic Studies. Dr. Langston earned the Navy designator Master Training Specialist and completed the Marine Corps Command and Staff JPME at Camp Lejeune, NC. Dr. Langston was recently selected as the Outstanding Alumni for 2016 at the University of Louisiana, his alma mater. He also earned a Ph.D. in Practical Theology from Kings College, University of Aberdeen, Aberdeen Scotland.

His books A Journey to Hope: Healing the Traumatized Spirit and From Despair to Hope are available in print or digital download from Amazon.